Finding a cure for Poor Penmanship: Newspaper Article from TheJC.com 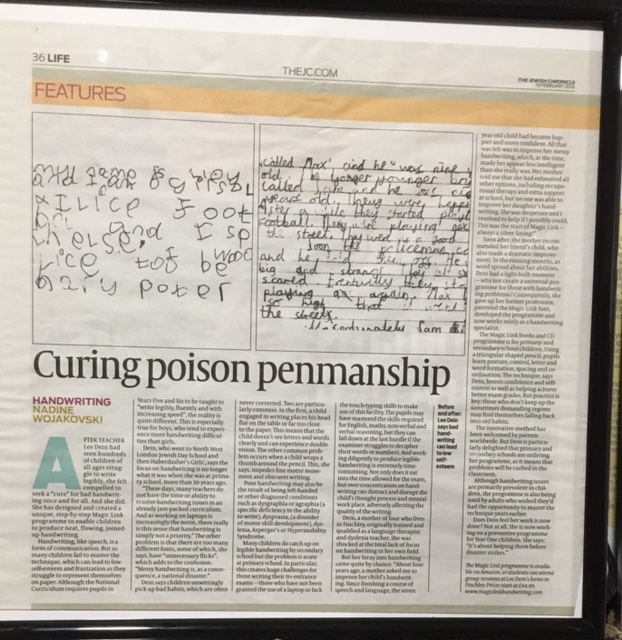 Finding a cure for Poor Penmanship

By Nadine Wojakovski, February 18, 2016
After teacher Lee Dein had seen hundreds of children of all ages struggle to write legibly, she felt compelled to seek a “cure” for bad handwriting once and for all. And she did. She has designed and created a unique, step-by-step Magic Link programme to enable children to produce neat, flowing, joined-up handwriting.
Handwriting, like speech, is a form of communication. But so many children fail to master the technique, which can lead to low self-esteem and frustration as they struggle to represent themselves on paper. Although the National Curriculum requires pupils in Years Five and Six to be taught to “write legibly, fluently and with increasing speed”, the reality is quite different. This is especially true for boys, who tend to experience more handwriting difficulties than girls.
Dein, who went to North West London Jewish Day School and then Haberdasher’s Girls’, says the focus on handwriting is no longer what it was when she was at primary school, more than 30 years ago.
“These days, many teachers do not have the time or ability to resolve handwriting issues in an already jam-packed curriculum. And as working on laptops is increasingly the norm, there really is this sense that handwriting is simply not a priority.” The other problem is that there are too many different fonts, some of which, she says, have “unnecessary flicks”, which adds to the confusion. “Messy handwriting is, as a consequence, a national disaster.”
Dein says children unwittingly pick up bad habits, which are often never corrected. Two are particularly common. In the first, a child engaged in writing places his head flat on the table or far too close to the paper. This means that the child doesn’t see letters and words clearly and can experience double vision. The other common problem occurs when a child wraps a thumb around the pencil. This, she says, impedes fine motor movement and obscures writing.
Poor handwriting may also be the result of being left-handed or other diagnosed conditions such as dysgraphia or agraphia (a specific deficiency in the ability to write), dyspraxia, (a disorder of motor skill development), dyslexia, Asperger’s or Hypermobility Syndrome.

Many children do catch up on legible handwriting by secondary school but the problem is acute at primary school. In particular, this creates huge challenges for those writing their 11+ entrance exams – those who have not been granted the use of a laptop or lack the touch-typing skills to make use of this facility. The pupils may have mastered the skills required for English, maths, non-verbal and verbal reasoning, but they can fall down at the last hurdle if the examiner struggles to decipher their words or numbers. And working diligently to produce legible handwriting is extremely time-consuming. Not only does it eat into the time allowed for the exam, but over-concentration on handwriting can distract and disrupt the child’s thought process and mental work place, adversely affecting the quality of the writing.
Dein, a mother of four who lives in Finchley, originally trained and qualified as a language therapist and dyslexia teacher. She was shocked at the total lack of focus on handwriting in her own field.
But her foray into handwriting came quite by chance. “About four years ago, a mother asked me to improve her child’s handwriting. Since finishing a course of speech and language, the seven year-old child had become happier and more confident. All that was left was to improve her messy handwriting, which, at the time, made her appear less intelligent than she really was. Her mother told me that she had exhausted all other options, including occupational therapy and extra support at school, but no one was able to improve her daughter’s handwriting. She was desperate and I resolved to help if I possibly could. This was the start of Magic Link – always a silver lining!”
Soon after, the mother recommended her friend’s child, who also made a dramatic improvement. In the ensuing months, as word spread about her abilities, Dein had a light-bulb moment – why not create a universal programme for those with handwriting problems? Consequently, she gave up her former profession, patented the Magic Link font, developed the programme and now works solely as a handwriting specialist.
The Magic Link books and CD programme is for primary- and secondary-school children. Using a triangular shaped pencil, pupils learn posture, control, letter and word formation, spacing and co-ordination. The technique, says Dein, boosts confidence and self-esteem as well as helping achieve better exam grades. But practice is key: those who don’t keep up the sometimes demanding regime may find themselves falling back into old habits.
The innovative method has been welcomed by parents worldwide. But Dein is particularly delighted that primary and secondary schools are ordering her programme, as it means that problems will be curbed in the classroom.
Although handwriting issues are primarily prevalent in children, the programme is also being used by adults who wished they’d had the opportunity to master the technique years earlier.
Does Dein feel her work is now done? Not at all. She is now working on a preventive programme for Year One children. She says: “It’s about helping them before disaster strikes.”
The Magic Link programme is available on Amazon, or students can attend group sessions at Lee Dein’s home in Finchley. Now also available as downloadable video tutorials.
February 19 2016
Magic Link Handwriting