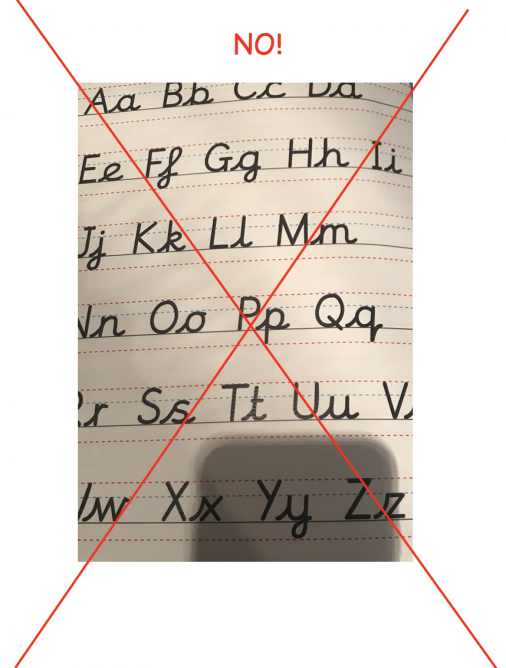 What is an entry stroke?

The skill of handwriting is a difficult process and I believe that the ‘entry stroke’ is unnecessary,  arduous to form and should be abolished!

An entry stroke has many other names; It is also known as a ‘lead- in’, ‘initial flick’, ‘entry flick’, ‘in stroke’ ‘whoosh-in’ or ‘continuous cursive’.  This is the aspect of a font, encouraged by many schools, involving a small flick at the beginning of all letters of the alphabet. This flick is often introduced when children first learn to write. This style of handwriting is sometimes referred to as ‘continuous cursive’ or ‘cursive’.

The entry stroke at the start of a letter is the subject of much controversy and debate amongst many teachers and educators. This font has an upward flick at the beginning of each letter which often makes writing tedious and laboured.

Magic Link teachers have taught thousands of children and have evidence to show that faster and more fluent writing is achieved when the entry stroke is removed.

Dr Angela Webb, former chair of the National Handwriting Association believes that the practice to impose a continuous cursive handwriting style, especially on children as young as five, may be misguided. She states that “Many have found that the teaching of continuous cursive, with its florid
letterforms and its baseline ‘entry’ and ‘exit’ strokes, whilst achievable by some children, leaves many struggling to write.” Click here to see full article.

6 reasons to abolish the entry stroke…

Devotees of the entry stroke used to enjoy the simplicity of having the same starting point for each letter. Initially, it seems logical to start each letter ‘from the ground’ and aesthetically the font is sometimes seen as being beautifully old-fashioned and traditional.

However, when introduced at the joining stage, many children see them as an ‘add on’ and become confused. They may try to write them in a downwards direction after the letter is completed thus defeating the whole point.

When children are taught to use an entry stroke with every letter, they require extra guidance, particularly in the letters: ‘o’, ‘r’ ‘v’ and ‘w’. These letters require 2 different types of strokes in the same letter – the entry stroke and the exit stroke and these two strokes are formed differently, which adds to the confusion.  Furthermore, some children continue to use the accustomed lead-in stroke and end with an extra loop that can be mistaken for a ‘u’.

There are often real difficulties caused by entry strokes which arise as soon as they are introduced. When introduced as part of a child’s first letters, they often make the simple letter shapes very confusing and more difficult to form. For instance, the movement made from a lead-in stroke leading into the letter ‘a’ is too complex for many small children to master.

3. The entry stroke slows down the speed of writing.

Speed is one of the main, fundamental targets in handwriting as examinations involve writing down as much information in a limited and controlled timed period. Requiring a child to repeatedly add the entry stroke at the beginning of ever letter, significantly slows down speed of writing.

Extra time is required to form this additional unnecessary movement at the beginning of every letter. This can be incredibly frustrating for children, especially as they get older, as fast, legible handwriting is a crucial factor in exam success.

Teachers, who insist that the initial flick remain, are inadvertently damaging their pupils by slowing them down and potentially jeopardising results and future exam success. This small entry stroke takes double the amount of time and often confuses causes confusion and leads to messy handwriting. Insisting on entry stroke may reduce a child’s chance of success.

4. The entry stroke can cause children to lose confidence in writing.

The entry stroke is often difficult to master and many children loose confidence in attempting to produce letters. The struggle and extra effort to produce this consistent style is time- consuming and unnecessary and can result in children disliking handwriting.

Having to add an entry stroke at the beginning of each word is laborious and hard compared to the Magic Link font, which has no unnecessary flick and curls and makes handwriting easy to learn.

The 15 Magic Link letters of the alphabet

5. The entry stroke serves no purpose and can causes fatigue.

The flick at the beginning of words serves no purpose at all. It does not add to the flow or speed of a child’s writing and appears to be an obstacle, adding up to 50% extra time to the handwriting movement.

Children often become obsessed with this unnecessary letter stroke which does not add to meaning, neatness or content and is pointless. Crucially the entry stroke does not assist the child with joining up their writing.

6. The entry stroke reduces a child’s enjoyment of handwriting.

Writing words and sentences are an important part of communication and this should be fast, fluent and fun.

Adding an obstacle such as the entry stroke means that many children’s writing becomes laboured and slow, reducing the enjoyment of handwriting. Children may tire more easily and not enjoy writing as much as others who do not adopt the entry stroke handwriting style.

The disadvantages of entry strokes are enormous; having a flick at the beginning of every letter can be tedious and confusing often resulting in poor or illegible handwriting.

The ‘continuous cursive’ style requires a higher level of gross and fine motor coordination which many children find too difficult and this style should be abolished. Dr Angela Webb also states that “Forcing children with motor coordination difficulties to join may create a range of unnecessary problems with writing and result in an aversion to doing it.”

Magic Link teachers, parents, pupils and schools have evidence that children write letters, words and sentences much more easily when they are taught a simple font, such as in the Magic Link Handwriting Programme where letters start from the top and ‘fall down’. This speeds up handwriting allowing pupils to focus on content rather than formation. This results in faster, fluent, neater handwriting and the opportunity of achieving higher educational success.